I've researched place name origins in the UK and translated into Japanese according to my interests, mainly the places where I visited. Since I stayed in Tokyo for a several months, I decided to research the place name origins in Japan and translate into English as well. *City/town/village, Prefectures and Alphabetical order. **Area sizes have changed due to the Acts on Indication of Residential Address and so on. Excluded peregrinational details here because of complexity, Especially in Tokyo. ***Japanese Key word;  Ieyasu Tokugawa (Edo shogunate), Machi (town)
It's an up-to-the update. Translated by @I-ADNES 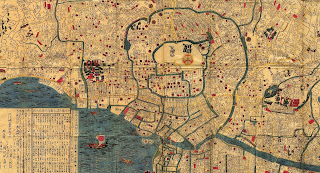 Sendai, Miyagi; When the first daimyo of Sendai Domain, Masamune Date built the castle, he changed the Chinese character of 'Sendai' wishing probably 'the land would be like a enchanted land Sennin/hsien lives'. 'Sen' means hsien and 'Dai' means mounting.

Kakunodate, Akita; Kakunodate is a former castle town. 'Kaku' means corner and 'date/tate' means a mansion or a castle. It is said that was because the castle was built on the corner of the Hinokinai river and the Innai river.

Tono, Iwate; It is said 'Tono' come from Ainu word.


Tokyo; Tokyo means 'Eastern Capital' (formerly known as Edo), because it's located in East of the old capital of Kyoto. Edo became the capital, after the Emperor moved his seat to Edo from Kyoto in 1868, and Edo was renamed Tokyo.
References;