After I got married in the UK, I needed to take the Life in the UK test as a part of my application for Indefinite leave to Remain (ILR). My husband and my friend who used to be a school teacher helped me. She gave her knowledge on a wide variety of subjects. And she mentioned 'touch wood' in order to prevent a confident statement from bringing bad luck. I thought about it in Japanese, and found 'kuwabara-kuwabara'. Kuwabara means a mulberry field, and it came from Sugawara no Michizane (845-903).

He was a scholar, poet and politician, who was born into a family of scholars. He was especially good at Kanshi; the Japanese poetry written in Chinese. He was a genius and a serious man, and passed the entrance examination to the national academy. After graduation he began his career in the court as a scholar, built his career, and served the Emperor as a trusted Minister of the Right. But he fell into disfavour by his rival and was exiled to Dazaifu, Kyushu, and died at the age of 57.

After Michizane's death, plague and drought spread and the sons of the Emperor died in succession, and unlucky things lasted in Kyoto. The Imperial Palace was struck repeatedly by lightning, and the city experienced weeks of rainstorms and floods. As a legend, it is said the mulberry field Michizane owned was never be damaged by lightning, and that Michizane became a thunderbolt and threatened Kyoto. So we say 'kuwabara-kuwabara' as a spell to avoid bad luck, especially lightning strikes.

Attributing this to the angry spirit of the exiled Michizane, the imperial court built a Shinto shrine called Kitano Tenman-gū in Kyoto, and dedicated it to him. A Shinto Shrine 'Dazaifu Tenman-gu' in Dazaifu, Fukuoka is built over the grave of him, and one of the main shrines dedicated to Tenjin; the deity of Academics, scholarship and learning.

I had a solo trip to Kyushu 9 years ago. Kyushu is a land far from my hometown. And I've visited 'Dazaifu Tenman-gu' as my plan. It was one of the greatest shrines I ever visited. At that time I didn't know much about Michizane, but I knew he was the patron saint of study. I think I was a lucky to have an opportunity at that time to visit there. http://www.dazaifutenmangu.or.jp/en 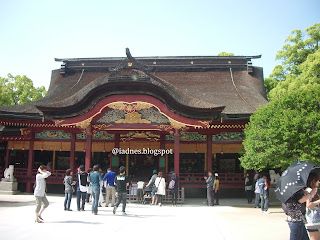