When we went back to Japan, we travelled to Aomori prefecture, in northern Japan. Aomori literally means blue forest, although it could possibly be translated as "green forest". I've been to Towada Lake which is located on the border between Aomori and Akita prefectures, but never been to proper cities in Aomori. Since a bullet train line has been extended to Hokkaido via Aomori, we decided to visit Hirosaki-city, in Aomori. 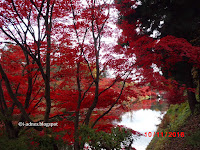 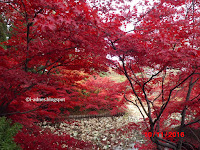 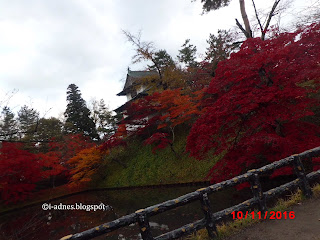 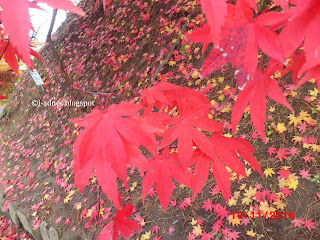 Hirosaki Castle was built in 1611. It's famous for its three-story castle tower in the beautiful cherry blossom season. When we visited there, autumn colours, especially red leaves, were still beautiful. 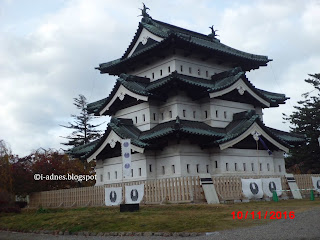 The castle's original five-story keep burnt down in 1627 after being struck by lightning. The present three-story keep was built in 1810. It used to stand on the stone base on the corner, but now, it's on the ground. Engineers have moved a 400-year-old castle tower so that repairs can be carried out on the stone base of the tower. It's an amazing skill. 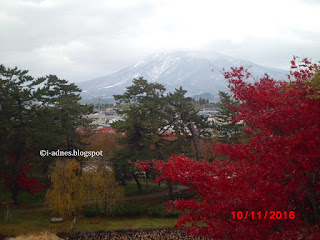 Inside the castle tower, there are a few displays, explaining how they moved this tower, rather than the history of the castle. The castle standing on the ground looked smaller than it used to be. I expected it, but it was disappointingly small, unfortunately... However, you can enjoy the layout, with a moat as well as steep and narrow stairs inside, as a feature of what a Japanese castle is like. I wasn't impressed by the castle tower itself very much, but I thought the gates and turrets were worth seein. The castle is located in the Hirosaki Park, and you can see the nice view of Mount Iwaki as well. 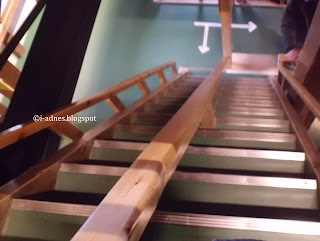 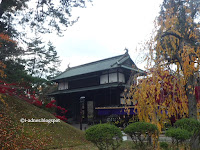 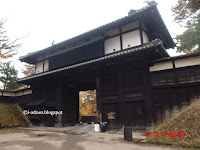 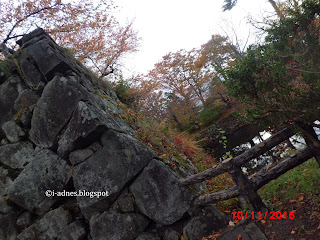 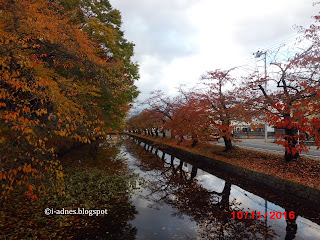 Aomori is famous for its apples. We didn't forget to eat apple cake and drink apple juice. I had an apple hot juice with them. :) 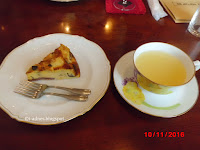 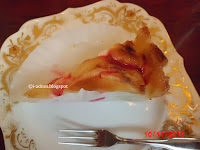 The view from a platform was fantastic! :) 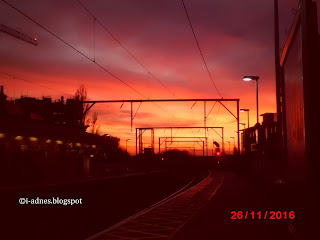 While we stayed in Sendai, there was a quite strong earthquake in the morning. I jumped up from the bed and urged the big mouse to evacuate to the narrow space. It wasn't the first time for him, but the situation of shaking of a wooden house is different from tall buildings. It was the earthquake originating from the coastal Miyagi prefecture, but there was no fear of a tsunami with it. It brought back awful memories. Nowadays, earthquakes happen all around the world. Perhaps it isn't an exaggeration to say that everyone is a victim of earthquake or natural disasters.

We visited Yuriage district, Natori city, Miyagi, where was flatland and was hit by the catastrophic tsunami in 2011. Since I moved to the UK, it was the first time for me to visit the seaside after the Great East Japan Earthquake. I could have visited there earlier, but I felt something scared. Now, rubbles and mud were completely cleaned up, but still nothing was around there. And still you can see some damaged foundation stones of house. 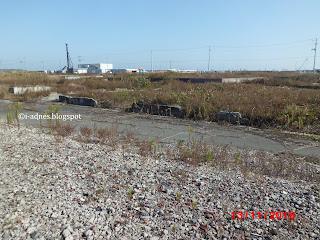 There is a hill, just 700 meters from the coast, with an elevation of 6.3 meters. On March 11, 2011, a 8.4-meter tsunami from the earthquake swept over this hill and washed away shrines that were located on top of the hill. Some people evacuated to this hill because this was one of the evacuation areas. Who could have imagined tsunami wave which was higher than this hill would come? Here is flatland and this was one of the highest places around here, but only a handful of people who climbed the tree, held branches, endured cold weather till rescue came, survived. 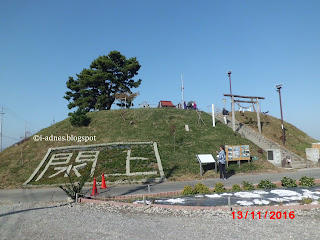 Now there is a memorial monument near the hill. It was built to demonstrate resolve to restore the damage from the earthquake, in memory of its victims. Even now, people visit here constantly to make a prayer. The top of this tower located in the middle of the mound shows the same heights of tsunami. 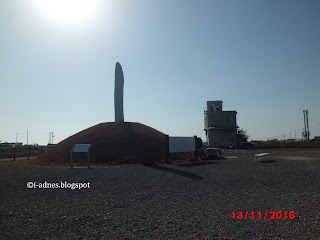 Near the monument, an old building remains. It is said some people evacuated to the top of this building and had a narrow escape with being leg‐deep in water. Their fear and coldness with wet body is beyond imagination. 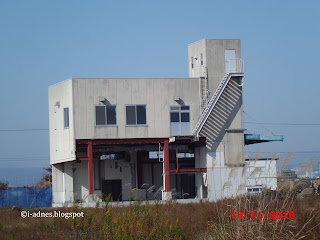 Not only Yuriage, but coastal cities, towns and villages are moving towards the future and achieving reconstruction a bit by bit. But I felt time passed very slowly in that place. They are going to raise the ground level by the sea, but haven't started yet. The Port Morning Market was held in Yuriage on Sundays and holidays. Which boasts a 40-year tradition and reopened in 2013. You can get very fresh fish and other products there. It's good to see it was crowded with many people. I will never forget about that day. 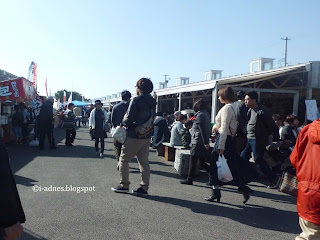 Japanese people like to make a 'special day', even though not many people know. I doubt it has something to do with sales promotional strategy... According to the news, today, 22nd November is 'the day for married couples'. I don't know the real meaning, but 11 can be read 'good (ii in Japanese)' and 22 can be read 'married couples (fufu in Japanese). It's sophistry.

After we had a quarrel, the big mouse bought me flowers. Are we a nice couple??? 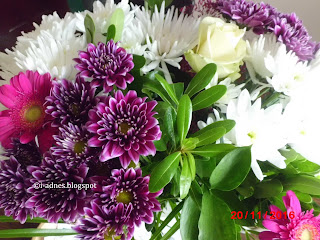 Now I came back from Japan. After a pleasant flight, there's the troublesome process of clearing immigration. Even though I have nothing to hide, it always gives me the hump and makes me nervous. Because the queue is always long and also I had a trouble at the Heathrow Airport the first time I arrived. I was young. Young people normally tend to be asked lot of questions. It was allowed to enter the UK because I was in a group and everybody was ok. But I learnt that UK passport control check is so strict. Now it's getting stricter I feel.

When we arrived at the passport control at the airport, the queue was short. But only a couple officers worked at the counters. Also a lady had trouble and was taking a lot of time. The process was annoyingly very slow... 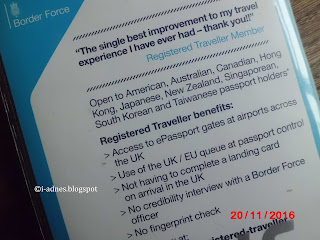 I need to use Non-EU queue alone or can use EU queue when I am with my husband (English). The officer gave me a note about 'registered traveller' kindly. This service is open to American, Canadian, Hong Kong, Japanese, New Zealand, Singaporean, South Korean and Taiwanese passport holders. That means, we are trusted by the UK, in a sense. If you register for it, you can have benefits such as use of the UK/EU queue, no need to complete a landing card, etc... I thought it might be useful. BUT this service is NOT free. It cost 70 pounds per year!!! It's ridiculous. I've completely forgotten what's the UK Border like. If you are a rich person, it might be a small sum of money. If you are a business person and often use the airport, it might be helpful. If it was 17 pounds, well...there is still room for consideration. If it cost 17 pounds one time only, it would be better. But, I was wrong. I am shamed of myself that I thought even a little it was a nice service. To be honest, it's a rip-off...

Email ThisBlogThis!Share to TwitterShare to FacebookShare to Pinterest
labels: the UK

It's getting cold, but it's still warmer than the UK. If winter arrives, it becomes colder and white here. We've walked around and enjoyed the beautiful colour of leaves before we go back to the UK. 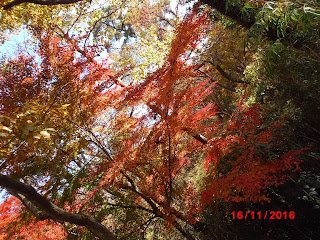 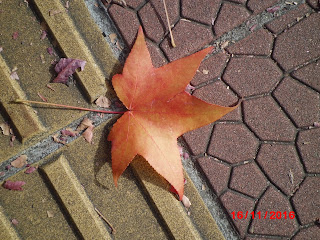 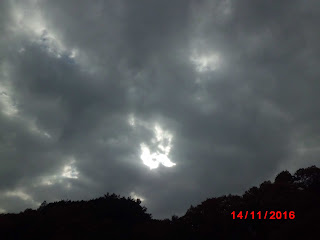 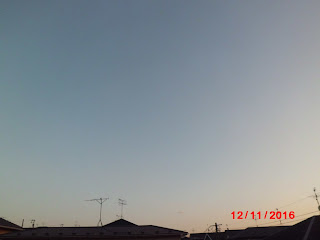 Wherever you walk, the trees amuse you with beautiful colour. :) 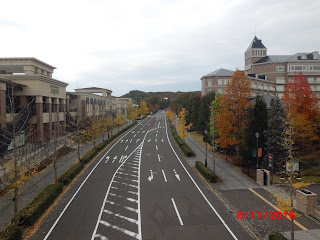 Now I am in Japan. We decided to spend a holiday in my country this year. It's a nice trip but also the trip to recognise that my grandmother doesn't exist in this world anymore. Since I couldn't attend her funeral, I had the feeling that it was a bad dream in somewhere my heart. But she wasn't anywhere.

Before we left the UK, we travelled to Paddington Station to get a Heathrow Express. We found the ticket machine, but it was only for credit card payment and cash was not accepted. The big mouse became a bit grampy, because he wanted to pay by cash. We found other ticket machines, but none of them accepted cash. During a couple years, old ticket machine which accept paying cash had gone. A staff member of the station suggested us to go to the ticket office. Paying by credit card became more common, we couldn't help realising that the time has changed.

There was not a long queue to get a ticket, but seemed like he couldn't get it satisfy himself. Be chilled, the big mouse. We may not be up with the times...
posted by i-ADNES At 07:58

Email ThisBlogThis!Share to TwitterShare to FacebookShare to Pinterest
labels: the UK 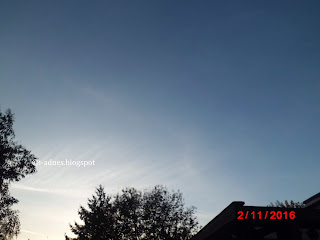